Dutch Linguistics Expert to Offer Lecture on Language and Cognition

What causes variation between languages, and what do they have in common? How is language embedded in our general cognitive system? These are some of the questions that Eric Reuland, Faculty Professor of Language and Cognition at the Utrecht Institute of Linguistics (OTS) (Utrecht University), will address in a lecture course entitled ‘Syntactic approaches to anaphora’ that will be held at HSE Moscow from September 12 till 22, 2016. Professor Reuland recently spoke with the HSE news service about his research interests, his upcoming visit to Moscow, and some books he recommends for those interested in gaining exposure to the field of linguistics.
Research&Expertise HSE guests linguistics
September 12, 2016

‘A Scientist Must Be a Curious Person’

Monika Wohlrab-Sahr, Professor of Cultural Sociology at the University of Leipzig in Germany, began her involvement with HSE when she started working with two young scholars – Christian Fröhlich, an Assistant Professor at HSE and a former PhD student of hers, and Rafael Mrowczynski, who has served as a DAAD-lecturer at HSE. Ahead of her upcoming visit to Moscow, where she will present her work on ‘Multiple Secularities’ and give a seminar on Qualitative Methods, Professor Wohlrab-Sahr spoke with the HSE news service about her work, her academic interests, and her views on the key attributes researchers need today.
Research&Expertise HSE guests cultural sociology
September 09, 2016

Students from more than 20 countries and almost 200 international staff members currently study and work at HSE. With this in mind, HSE Day in Gorky Park will offer a platform for intercultural communication in the most varied of fields, from music to breaking stereotypes about certain countries and cultures. Here, international students will take the lead, and you’ll be able to learn about various cultures first-hand.
Community Invitation to participate HSE Day
September 05, 2016

Each year HSE welcomes new colleagues – Ph.D. holders from the world’s best universities – who join the university through the international recruiting programme. HSE continues the tradition of public lectures at HSE Day, and holds HSE Open Talks in English. Academics from all over the world representing the most diverse disciplines will discuss their research and talk with the public.
On Campus international faculty HSE Day
September 02, 2016

At the end of July it became officially known that the academic supervisor of the HSE International Laboratory of Game Theory and Decision Making, Professor Hervé Moulin, was elected as Vice President of the International Game Theory Society (GTS). The main purpose of the organization is to promote and support research, teaching and applications of game theory.
On Campus professors international faculty game theory
August 24, 2016

Thadeu Gasparetto, a graduate of the University of Vigo (Spain) who studies sports economics, recently joined the HSE  International Laboratory of Intangible-driven Economy.  During a recent visit to Perm, he spoke about his research plans and shared his impressions of HSE students and staff members.
On Campus international faculty intellectual capital sports management
August 08, 2016 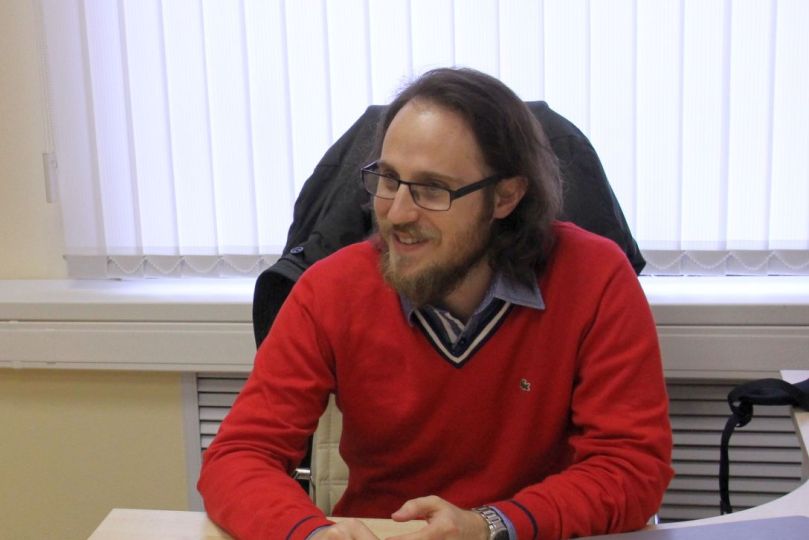 Thadeu Gasparetto, a graduate of the University of Vigo (Spain) who studies sports economics, recently joined the HSE  International Laboratory of Intangible-driven Economy.  During a recent visit to Perm, he spoke about his research plans and shared his impressions of HSE students and staff members.
On Campus international faculty intellectual capital sports management
August 04, 2016

Beginning with the 2016-2017 academic year, the undergraduate programme in Political Science at HSE St Petersburg is changing its focus by not only updating the content of the curriculum but also changing the name to Political Science and World Politics, which reflects these substantial changes, but also becoming a truly international in the sense of its teaching staff. Dr Ian Ferguson, a Scottish expert on international relations, will be joining the team of political scientists at HSE St. Petersburg.
On Campus international faculty world politics
July 27, 2016

Art and Science of Communication - The HSE Look (July)

In its 28th issue The HSE Look presents the Faculty of Communications, Media and Design through interviews with its Deputy Deans and Professors. With the end of the academic year comes the time of HSE Best Teacher Award, and we are glad to share the new procedures and tips from awardees of previous years with the English-speaking readers. Summertime is ahead,but it is already time to make plans for the fall - we present the upcoming short-term visits of guest scholars to HSE and an opportunity to give a short public lecture at HSE Day in September.
Research&Expertise professors new at HSE international faculty HSE guests ideas & experience research projects The HSE LooK
July 26, 2016