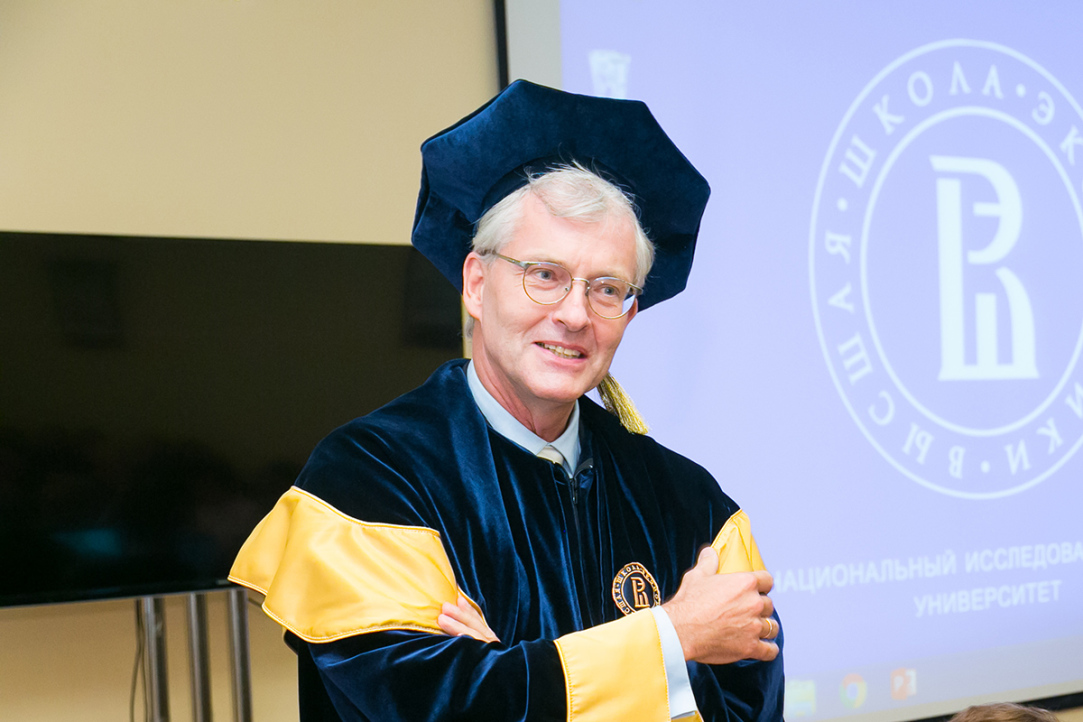 For nearly a quarter of century, Maarten Janssen, a well-known expert in microeconomics and currently a professor at the University of Vienna, has been working with HSE. A ceremony awarding him the honorary title took place at a meeting of the HSE Academic Council.
Community professors international faculty awards
February 05, 2018

Vera Pozzi, originally from Italy, received her PhD in Philosophy from Università degli Studi di Milano in 2015. She recently started as a post-doc research fellow in the School of Philosophy (Faculty of Humanities), where she is studying contemporary Russian Orthodox thought. Vera spoke with the HSE News Service about her experience at HSE Moscow so far, her research interests, and what she is hoping to accomplish over the coming year.
Research&Expertise international faculty fellowship
January 31, 2018

Another Book About Stalin – But This One’s Different 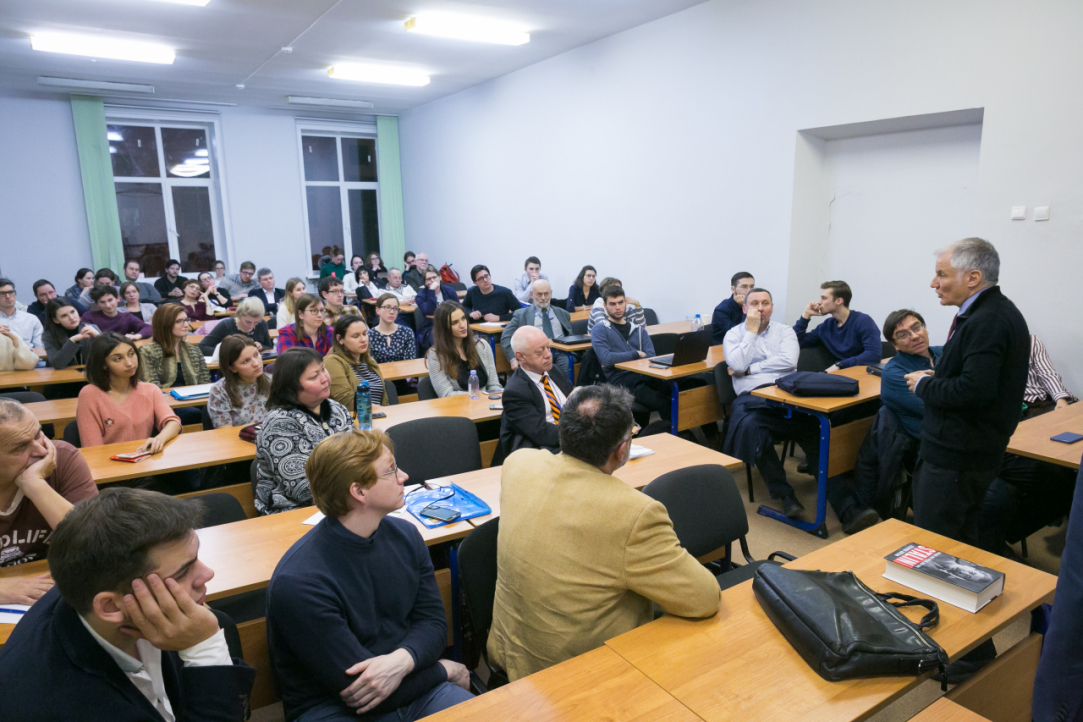 On January 15, HSE welcomed Stephen Kotkin, Professor of History at Princeton University and Associated Senior Research Fellow at HSE’s International Centre for the History and Sociology of World War II and Its Consequences. Professor Kotkin spoke about his new book, Stalin: Waiting for Hitler, 1919-1941 (New York, 2017) to an audience of students, staff, fellow researchers and members of the general public.
Research&Expertise international faculty Soviet history
January 22, 2018

Maria Sole Continiello Neri, a native of Rome, Italy, recently joined the Centre of Comparative Law at HSE as a Post-Doctoral Research Fellow. While at HSE, she will study Russian immigration law and practice against the backdrop of the European Court of Human Rights. She also plans to study law and ethics of the use of Lethal Autonomous Weapons (LAWs) during armed conflict.
Research&Expertise international faculty comparative law
January 18, 2018

HSE News Service has asked some of our teachers at HSE for any advice they might have for international students in Moscow. Arkaja Chakraverty and Renira Rampazzo Gambarato agreed to share their secrets. Ms Chakraverty, from India, is Assistant Professor at the International College of Economics and Finance and moved to Moscow in 2017. Dr Bambarato, from Brazil, is Assistant Professor at the Department of Media, Faculty of Communications, Media and Design and has been working at HSE since 2013.
On Campus international faculty ideas & experience international students
January 15, 2018

Jessica Werneke, who completed her undergraduate studies at the University of Iowa and her PhD at the University of Texas at Austin, joined the International Centre for the History and Sociology of World War II and its Consequences as a Research Fellow in 2016. Originally from Chicago, Illinois, she has spent a considerable amount of time living internationally – in both the UK and Latvia – and following her post-doc plans to start a new position as a Newton International Fellow of the British Academy at Loughborough University, where she will continue her research on Soviet photography clubs and amateur photographers in the RSFSR and the Baltic Republics.
Research&Expertise international faculty history
January 10, 2018 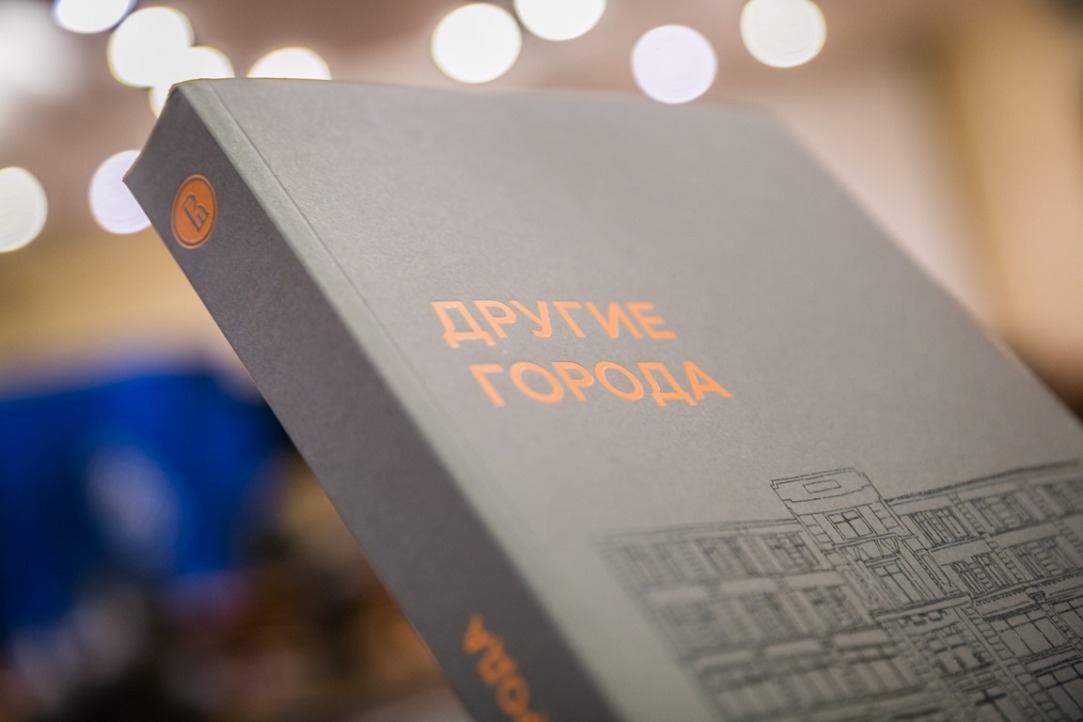 On its 25th anniversary, HSE has published a book - Other Cities - a collection of stories by the University’s staff about over 80 cities throughout Russia and the rest of the world, where the authors used to live and work, and which directly contributed to their personal and academic paths. The book won’t be on sale, but we will give it to you by making a donation to a hospice.
On Campus ideas & experience anti-versary charity
December 08, 2017

It is no wonder that the end-of-the-year issue of The HSE Look at a research university is about research. In the December issue we give an overview of the Research Productivity Assessment monitoring through an interview with Dmitriy Dagaev. The issue also focuses on the introduction of postdoctoral fellows who have joined the university’s laboratories and centres this academic year, and presents useful personal insights by Tim Jaekel in the column “Discovering HSE and Russia”.
Community professors international faculty ideas & experience The HSE LooK
December 07, 2017

In addition to interviews with international faculty, The HSE Look is launching a new feature – a column about their life in Russia, what they discover in different cities, and interesting venues at HSE and beyond. If you have an interesting experience to share, please contact us at ifaculty.support@hse.ru. In this issue, we present a column by Tim Jaekel.
Community international faculty ideas & experience Discovering HSE and Russia The HSE LooK
December 06, 2017

Every year, HSE hires post-doctoral researchers from all over the world. And in 2017-18, more than 30 of them started work at laboratories and research centres in a large range of fields and specializations. The HSE Lookis pleased to introduce this year’s international researchers, so that you can learn more about your colleagues and find out about opportunities for potential collaboration.
Community international faculty The HSE LooK
December 06, 2017
1 2 3 4 5 6 7 8 9 10 11 12 13 14 15 16 17 18 19 20 ... 58